The team at the LEGOLAND Windsor Resort have been in touch to let us know that Darth Vader and his Imperial Stormtroopers will be there to celebrate May 4th, the adopted Star Wars day. There will be events and activities for three days of fun from Saturday May 4th to Monday May 6th, including building activities, a Jedi Training Camp and the new LEGO Star Wars Gallery in the Star Wars Miniland Experience. Read on for all of the details!﻿

Here is the press release with more information:
COMING SOON TO A LEGOLAND® NEAR YOU
LEGO® Star Wars™ Days
SATURDAY 4 May – MONDAY 6 May 2013
• Special themed weekend to celebrate the NEW LEGO® Star Wars™ Gallery in the Miniland Model Display
• Help build a gigantic LEGO Star Wars™ mosaic of R2-D2 using more than 80,500 bricks and a life size model of Yoda
• Resort invasion of over 100 Star Wars™ costume characters from the 501st UK Garrison
• Join a Jedi Training Camp to become a Jedi Knight and pose alongside a life-size Star Wars™ vehicle
• Win LEGOLAND prizes in the Star Wars™ costume competition
• PLUS see ‘The Empire Strikes Out’ and ‘LEGO® Star Wars: The Padawan Menace’ films 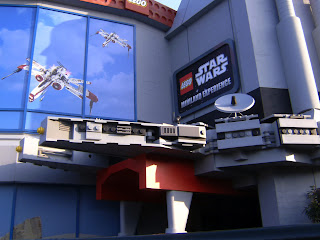 The Force grows stronger this May, as the LEGOLAND® Windsor Resort celebrates the opening of the NEW LEGO® Star Wars™ Gallery in the LEGO® Star Wars™ Miniland Model Display. From 4 - 6 May 2013 the resort will be invaded by 100 costume characters from the 501st UK Garrison and guests can enjoy a host of themed activities during three themed Star Wars™ Days including a gigantic LEGO Star Wars™ mosaic build.
LEGO building skills will be put to the test as guests join the Resort’s professional Model Making Team in a mammoth building project using more than 80,500 bricks to create a 4m high LEGO Star Wars™ mosaic of R2-D2 – voted by fans as their favourite character in the NEW Star Wars™ Gallery. They will also be able to join them building a life-size LEGO model of Yoda and would-be Jedi juniors can hone their Lightsaber skills at the Jedi
Training Camp. Plus Star Wars™ Costume Characters will march through the Resort daily and guests can check out a life-size replica of Luke Skywalker’s famous Star Wars™ Landspeeder. Daily fancy dress costume competitions with LEGOLAND goodies will be up for grabs and The Imagination Theatre will be showing an exclusive big screen film premiere of the ‘LEGO Star Wars: The Empire Strikes Out’ alongside ‘LEGO Star Wars: The Padawan Menace’. Plus spot the LEGO Star Wars™ Minifigures hiding out amongst the famous landmarks in Miniland. 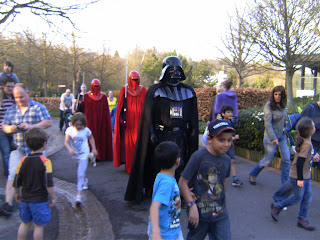 Click here to book tickets to LEGOLAND Windsor.
Be sure to check out previous All About Bricks coverage of last year's Star Wars days here.