Darth Vader Back on the Packaging in 2013

So not long after it turns out that Hasbro are completely shaking up the plan for the Star Wars action figure line, the UK Toy Fair has revealed that Lucasfilm have a new packaging design linked to Revenge of the Sith- and that it is designed to replace the Yoda design partway through 2013. What, why and will it work?


Since Revenge of the Sith hit cinema screens the first time, in 2005, Lucasfilm have released a new packaging style each year. Having a style guide for all of the licensees keeps the brand uniform so that consumers automatically see a product and associate with Star Wars. The only issue with changing the packaging every year is that if too much product was produced one year, and remains on shelves the following year, the line look is inconsistent. This may not be an issue for Star Wars fans, but for the brand managers it’s the last thing they want. 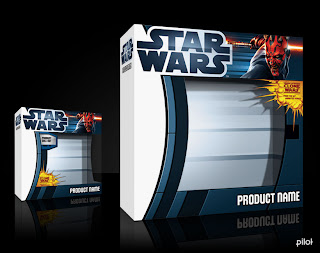 In 2012 Lucasfilm opted for Darth Maul packaging, reflecting the 3D release of The Phantom Menace  and the character’s return in The Clone Wars. The plan was mentioned for the packaging to change to the same style, however with Yoda rather Maul to represent Attack of the Clones in 2013. At that point, only Attack of the Clones was to be released this year. This changed and Revenge of the Sith is now also on the cinematic horizon for 2013, however Yoda is prominent in both films so it shouldn’t be a problem. Or so fans thought. 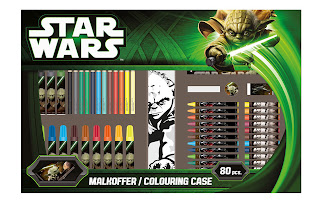 It turned out from looking around the UK Toy Fair that two different designs were on display – one, the Yoda design fans expected – the other, Darth Vader reaching with an orange-coloured Star Wars Logo as in 2005. Based on the past few years, it is clear that Lucasfilm would want one overall line look. So why two different designed? It turns out that the company has decided to switch designs half way through the year, from Yoda to Vader.

To believe that companies will be able to manufacture products in the Yoda packaging for that short of a time period, and have a smooth transition to the Vader packaging, is absolute madness. There will certainly be lots of Yoda packaged product left around in December, long after it should have changed over. 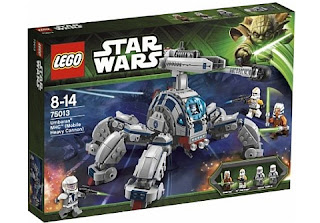 This was particularly bad news for LEGO, who had planned an entire marketing campaign around Yoda. Because of this, and because the LEGO products are designed so far in advance, they will not be switching over to the Vader packaging. So there will be no unified line look for the first time since around 2002. Why would Lucasfilm change part way through the year to potentially mess up something they are so insistent matters? They must be aware of the potential pitfalls.

The reason has to be to do with profit, and that they are convinced the Vader packaging is important to drive sales. The only way they could have come to this conclusion is looking at the sales of products in 2002 compared to 2005. Attack of the Clones had a much smaller product range with much less success. Revenge of the Sith, however, had a huge product range and surprisingly good sales throughout the whole year. From that point of view, it makes sense to try and replicate success. 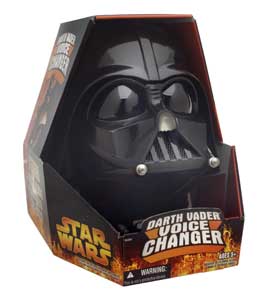 There were many factors, however, that combined to make Revenge of the Sith products so appealing. Everyone believed this would be the last time such a product launch would occur, the original trilogy had just seen release on DVD and the iconic Darth Vader was emblazoned over all of the packaging. The packaging alone was not what swung it. Even if it did play a huge part, this new packaging is too cartoony looking rather than imposing like the 2005 design. It’s unlikely the orange Star Wars logo makes much difference either.

But time will tell. Lucasfilm may have the best sales of licensed Star Wars products ever because they decided to give licensees very little notice to switch packaging designs after just six months… but C-3PO would tell you that the odds are against it
Posted by Graham at 7:14 PM